The Big Island of Hawaii immediately felt different from O’ahu to me. Yes, it was quieter and less crowded just as I hoped and expected, but it was also bigger. Everything felt a bit more wild and expansive and even the air smelled different here.

We stayed a bit off the beaten path in Captain Cook on the west coast. On our first day, we drove eastward and upward past Mauna Loa and Mauna Kea to Hilo in the east on what is known as Route 200 or the Saddle Road. It was absolutely breathtaking as we passed through a myriad of landscapes and environments.

In Captain Cook on the slopes of Mauna Loa, we were in lush rainforest where frogs sang a chorus by night and geckos clambered up our hotel walls and enjoyed leftover mango jam at our breakfast table. The ocean looked calm in the near distance, quite unlike the big waves and strength of the sea on O’ahu. There was a beautiful tranquility about this place that crept into your soul, where life seemed to move a little bit slower, but was a little bit more savoured. Birds sang in the trees but chickens clucked and roosters cawed at the early morning light, reminding us of man’s imprint on this place. This place felt much more like a place to be lived than one to be visited.

The road was steep out of Captain Cook, climbing up through rainforest and past small towns until the landscape changed, passing through grasslands until we found ourselves in an arid desert 6,000 feet up. The landscape was almost bizarre when I thought about where I came from just a couple hours earlier. There were scrubby bushes reminding me of the deserts of the American Southwest until I saw the cinder cones and dark, craggy lava beds dotting the landscape. The strange burning smell I couldn’t put my finger on, but first detected on the wind in Captain Cook was more prominent here. I presumed it was related to the volcanoes in some way.

Maybe most bizarre of all were the signposts to watch out for nēnē, the native Hawaiian goose. I just couldn’t understand how a goose could live in such an environment and I may have once slammed on the breaks on sighting a bird only to find out they were turkeys when I turned around.

According to the Pocket Guide to Hawai’i’s Birds and Their Habitats (by Pratt and Jeffrey) I picked up, the nēnē live so high up in volcanic rocks because it is where they found safety from human and introduced predators.

We passed more lava beds as we descended back into the coastal greenery on the windward side of the island and visited a few waterfalls, something we missed out on in O’ahu. We stopped to buy some locally-grown tropical fruit at a road stand and continued our way north, taking Highway 19 north toward Waimea before heading back around the west coast to Captain Cook.

Just north of Hilo on our way north, we paused for a mid-day walk at the Hawaii Tropical Botanical Garden. It was well-worth the stop as we explored a myriad of plant species, many of which I’ve hardly seen before from coffee plants to banana and coconut trees, to every colour and kind of orchid and bromeliad imaginable. 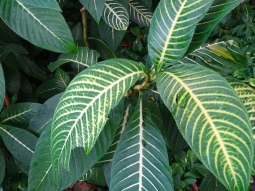 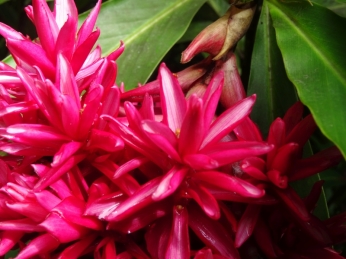 After filling my senses with the wonders of the botanic garden, we drove back north as the sun fell in the sky and found amazing views of the coast below as the ocean battered volcanic rock, lava flows cut across grass and gained a great appreciation for the volcanoes that make up this island. The view driving south down the west coast truly put into perspective just how huge these volcanoes are, so unlike any others I’ve seen. Their slopes seem to go on endlessly and at angles that, to me, defied logic. I have never seen land that sloped quite like that before. There was so much to see on the Big Island, we could have spent more time there. The next big stop we made was at Hawaii Volcanoes National Park.

This work is licensed under a Creative Commons Attribution-NonCommercial-NoDerivatives 4.0 International License. © Author and owner, fossils and fauna, 2015 - 2020. Unauthorized use and/or duplication of this material without express and written permission from this site’s author and/or owner is strictly prohibited. Excerpts and links may be used, provided that full and clear credit is given to the author and fossils and fauna with appropriate and specific direction to the original content.
%d bloggers like this: